Menu
Log in
Register
Install the app
You are using an out of date browser. It may not display this or other websites correctly.
You should upgrade or use an alternative browser.

Thanks. Hoping to put it to use again soon and looking forward to getting the electrical/lighting done. Got to source a good tongue box before that can happen.

Finally found a tongue box I was happy with. This is mostly for the electronic stuff (battery, solar charge controller, switch system and junctions/fuses). Now to get it mounted and some MDF inside for mounting things easily.

Nice! That trailer is quite the setup.

I imagine a few of us will be heading down that road in the near future.

Following the Africa trip in your magazine is a great insight to what is needed to live out of a vehicle, and how well certain items work.

I have a cousin who is setting up a van for long term living, and I referred him to TheRoadChoseMe.com, and he took a ton of good info!

Trailer did great even though we were really just sleeping there and hanging at out friends’ house most of the time. Remarkable how big a temperature difference there was in the sun in the morning between the annex and the actual tent. Too hot too early in the year!

Came up with a very interesting setup for the tongue/tongue box, more to come there.

Mounted a 3.5" RR LED flood in the stock taillight hole for the reverse light on the trailer.

I have a piece of marine plywood cut for the inside front of the box that will let me mount the components without adding more box holes and the next thing is to move the components to that and start finalizing wire length/terminations.

I only forgot one wire so far, I wanted a heavier ground between the trailer socket and the frame, but I was able to get it through without much trouble. Everything else is going to plan.

Lots of cutting, crimping, soldering and screwing in my future.

There are a couple things I want to clean up more before I call the wiring “done”, but everything wiring related aside from the trailer brakes and controller install is in and working.

Finished up too late tonight after a very long day to want to try to drag it out for proper photos but the trailer battery is charging off the Jeep when connected via the power umbilical and the solar panel is working great (plugs into a socket in the box).

I built two “extension cords” that also plug into sockets on the trailer box to run 12v power with two USBs each and a power socket for an inverter or whatever back into the tent.

The trailer has four LED cubes for scene lights, two repurposed LED rock lights as bed lights, an LED backup light and rock lights underneath that are triggered by either the Jeep dash switch (installed 6 rock lights on the Postal) or the Trigger switch unit in the tongue box.

The fridge is powered up properly and I ran some LED strip lights on a pin switch to light up the tongue box.

Hated cutting into the Postal to mount the 7-wire trailer socket, but it was worth it.

I already dig the rock lights under the Postal for working under it and I can tell we will use the trailer rock lights for low-level campsite lighting.

The Bluetooth control for the lights is cool and the phone app is actually pretty sweet.

I got a Bluetooth battery monitor too just because I’m paranoid and it was easier than wiring in a voltmeter. Pretty slick setup, I have to say.

WOW! This has been a fun project to watch. You are doing a great job.

HighSierra CJ said:
WOW! This has been a fun project to watch. You are doing a great job.

Gracias. Now to get out and put the thing to use!

Update time for this old thread.

I would say it’s damn rare that a project of mine actually works out exactly as envisioned and functions as well or better than my hopes when I started, but this is definitely one of them.

This thing has been dragged around behind the Postal (almost exclusively) everywhere from the Silver Lake Sand Dunes to Drummond Island to SEMA (then Seattle via California and home) and a pile of other trips and it just flat out works.

At SEMA ignited after the show.

NE CA just before the OR border where I camped near Crater Lake for the night on the way to my family to pick up my Uncle for a road trip in Seattle after SEMA. 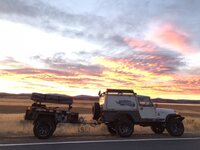 on the way to our 4th of July campsite on Drummond Island.

The solar setup has kept up with a full fridge for a week of camping off the grid on Drummond over the 4th of July (which it will do again here soon) in a fairly wooded area where it only saw morning sun. The charge controller works great and I love the silly little Bluetooth battery status unit.

It pulls like a dream, even better with a little load in it. Never felt the need to go back and add shocks. The trailer brakes are just great and can easily be dialed up to lockup and where I feel them stopping the postal. I usually run them quite low.

The lights are great but the only finicky thing is the Bluetooth controller. It sometimes pops lights on randomly. I talked to the company and they have a new version that solves that issue, I just added a switch to kill all light power when I knew I didn’t want them. The phone app also sometimes doesn’t like to connect to the controller but I usually use the switches anyway.

The fridge slide has the lock on the first slide broken now and it’s not really meant for outdoor use, so rust is starting to pop on it here and there. I knew that going in but the drawer and cutting board setup were too cool not to use and it has just been awesome.

Camping up north in MI near Petoskey

The tent sleeps SO well and has been fantastic. The annex room only goes on for longer stays because it’s so unwieldy to deal with. I knew the tent wasn’t high enough to properly deploy the annex but that was a sacrifice for stability I knew I was making. Some spring clamps work well to gather up the extra wall fabric to minimize sagging and make the door easier to use.

The tongue box and wiring have held up and worked great. I deeply love my umbilicals because the wires look good as new where the trailer jack is showing the effect of the sun.

all the lights on, I’ve since added amber covers to the main scene lights on each corner and usually either the bed lights or rock lights are all we use. The USB extension cords running into the tent have been perfection.

I had Matt at Gr8tops make a “trailer jacket” out of his Jeep Jacket materials and that is brilliant. It’s been showing it’s age after windy winters outdoors here in MI but it’s still together.

The one thing I always wanted to do was add a proper propane tank for the stove. The little green disposable ones are a PITA. Thanks to the Colonel (our recent JKU buy) we had a nice two-burner stainless cooktop and small tank/mount. I got those on the trailer last night in time for the SOA National.

The trailer Jack’s mounting plate is way huge for the tongue and had started bending and causing the wheel to kick out at an uncomfortable angle. I fixed that by building a spacer that goes under the tongue and between the mounting plate and the backing channels that sandwich the tongue to hold it in place. The height of the trailer means the jack is almost entirely extended so it always has a little angle on it. Need to get a photo of the new setup. If I had a bigger welder I’d make a matching heavy plate to weld to the tongue with a couple gussets but my weenie little welder wouldn’t manage.

Got a picture of the spacer. Two pieces of steel strap with crosswise pieces of square tube on either end with my seriously questionable welds (that just hold things in place, not structural)

The only other issue is that I hit snow and salt in Montana coming back from Seattle and the trailer was iced over with salty slushy garbage. My quick paint job on the square tube and brackets didn’t hold up. Theneedremoved, cleaned and repainted more properly. Someday...
Last edited: Jun 12, 2021

That stove is pretty cool looking. Amazing how much it looks like a Coleman. Just no liquid tank to pump. I have 4 of them. Who makes the stove ?

Belizeit said:
That stove is pretty cool looking. Amazing how much it looks like a Coleman. Just no liquid tank to pump. I have 4 of them. Who makes the stove ?
Click to expand...

Just got off the phone with somebody with a T3c for sale for $500. Sounds like somebody might have beat me to it. Looks pretty clean in pictures compared to most I have seen for that price. I'll know something Monday/Tuesday.

barrys said:
Just got off the phone with somebody with a T3c for sale for $500. Sounds like somebody might have beat me to it. Looks pretty clean in pictures compared to most I have seen for that price. I'll know something Monday/Tuesday.
Click to expand...

That’s what I got this one for